When most people visit France, they head to Paris. But the country has a lot of other great places to discover, too.  One of them is Lyon, France’s third largest city.  Located in the southeast of the country, not too far from both the Alps and the Côte d’Azur, and only a two-hour TGV ride from the capitol, Lyon has a lot to offer: fascinating history, beautiful architecture…and delicious food!  Even among the French, Lyon is known as a city where you’ll eat well. 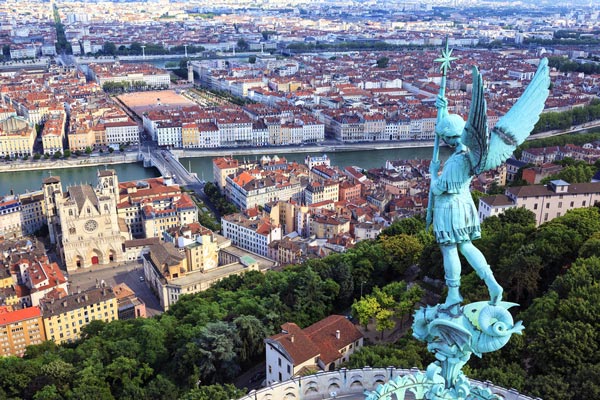 Here are some of the most famous (and delicious!) Lyonnais must-eats:

This tube-shaped white thing may not look very impressive, but it has a distinct, unforgettable flavor.  The French are brilliant at mixing foods you wouldn’t necessarily think would go together, and quenelle is a perfect example of that: creamed fish, egg, and flour in a white sauce make for a truly tasty treat.

If you like sausage, Lyon is your town!  Head into a traditional Lyonnais eatery, called a bouchon, to savor sausage-based dishes, including unpleasant-smelling-but-delicious tasting andouillettes (tripe sausage).

If you’re more into sweets than savories, Lyon still has a lot to offer. The city’s bakeries are filled with delicious pastries, including this typical one.  A brioche covered in a strange-looking, bright pink praline coating, it’s a glorious, sticky mess that may not be able to be completely consumed by any but the most diehard sugar addicts.

Another sugary treat iconic to the city, these cushion-shaped candies made of bright green marzipan encasing curaçao-flavored chocolate ganache were created in 1960 by the chocolatier Voisin.  Today, you can find them in many chocolate shops, and they’re worth a taste.

Okay, it’s not a food, but if you’re a wine fan, Lyon is a not-to-be-missed opportunity to savor local specialties from some of the most famous viticultural areas of France, the Côtes du Rhône and the Beaujolais region.

If you’re headed to Lyon, you’ve got quite a feast in store for you.  Bon voyage and Bon appétit!