The Aussies think I’m just plain weird. To them a kangaroo is something which barely registers on their radar – it is too commonplace and ordinary. For me – a European girl a long way from home – it’s simply enchanting. And since arriving in Australia I have been enchanted many times over because this land is simply bursting at the seams with wildlife which encompasses every superlative – cutest, scariest, strangest, biggest, most colourful, loudest and so on. There are animals here which keep their babies in pockets; there are egg-laying mammals, one of which even has a beak, and there are birds as tall as a man. A cloud of  fruit bats flying overhead, each as big as a cat complete with vast reptile-like wings, makes me feel like I have stumbled into Jurassic park and I seem to spend a lot of my time saying ̎what is that?̎

All of this is a legacy from 60 million years ago when Australia separated itself from the super-continent known as Gondwana and set itself up as a giant floating menagerie full of animals found nowhere else in the world but here. I am in my element. 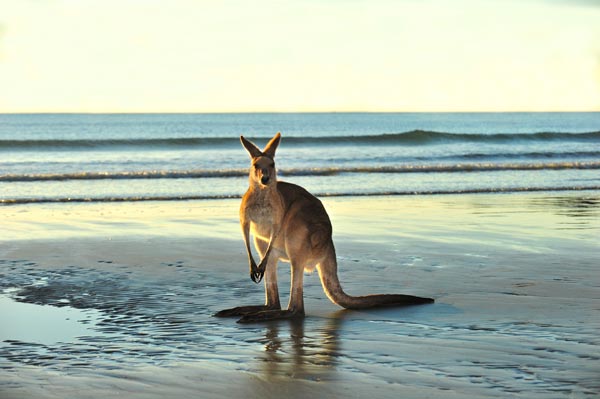 Equipped with the smallest of vans, which serves as both transport and accommodation, I have set off on an Australian road-tripping odyssey through New South Wales and Queensland. My quest to unearth idyllic spots in which to camp up for the night has delivered some unlooked for incredible experiences.

I suppose a place in Nymboi-Binderay National Park called Platypus Flat should have given me a clue but still......watching the duck-billed platypus cruise along the river bank in the mist-enshrouded first light of day was truly something.

A couple of days later I am camped ocean-side instead of riverside at Lennox Heads. Every year, from June to November, hordes of humpback whales migrate from the Antarctic to the warm waters of Queensland to mate and breed. If you're perched on a cliff top, as I am, spotting the whales is easy; a humpback whale spout shoots 4 metres into the air. Watch for long enough (I've been watching for hours) and if you're lucky (I'm lucky) you get to see these ocean behemoths launch themselves out of the water before crashing back in an explosion of water which can be heard from the shore. Enchanting indeed. 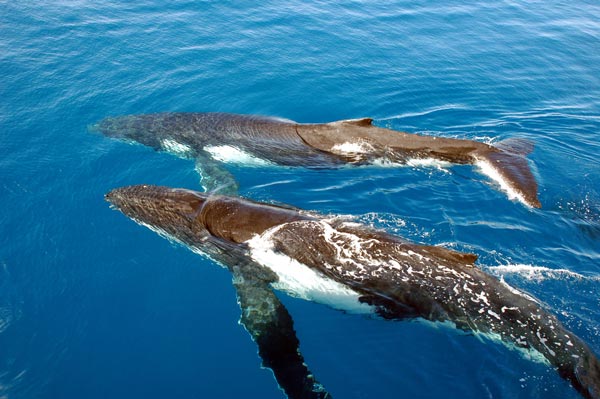 Spotting cruising dolphins is almost guaranteed if you spend any amount of time camped up by the beach as I do but there are also some extra-special encounters to be had. In the 1950s, on the Cooloola Coast of Queensland, a badly injured Indo-Pacific humpback dolphin washed up at Tin Can Bay. The locals fed him and nursed him back to health. Fully recovered he swam away to open ocean but the story didn't end there. He never forget the human friends who had saved his life and every single day he came back to see them. After a while he started bringing other dolphins with him; the succeeding generations still come, usually in the morning and swim into knee deep waters to say hi to anyone who has stopped by to see them. Dolphin encounters are always magical but the story behind this one takes it into the realms of fairytale.

Wildlife is one of Australia's biggest draws for visitors – from the iconic and cute koala to the formidable croc – the opportunities for getting up-close-and-personal here are infinite. You can walk canopies through the rainforest or you can hover over rainbow-coloured coral-reef gardens alive with fish, turtles and manta rays. I have done those things but strangely the gentlest and least dramatic of my wildlife watching experiences came to be my favourite, taking the form of a regular dawn ritual. I would climb from my van, rubbing the sleep from my eyes. I would boil my stove and armed with a steaming mug of coffee sit and watch. 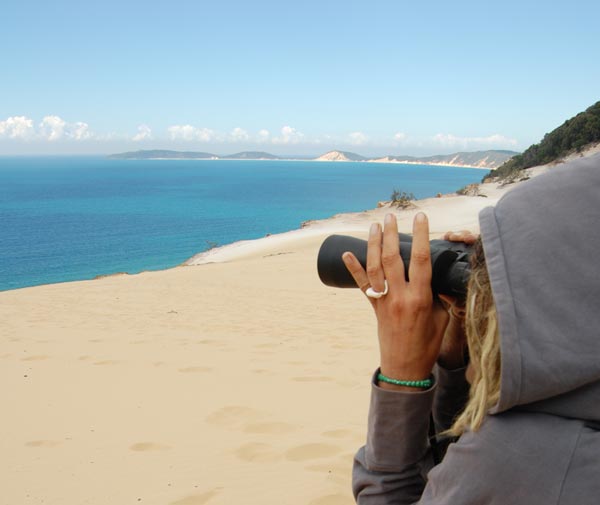 The birds of early morning seem to come in shifts. Somewhere off in the bush a kookaburra calls sounding more like a monkey than a bird. The earliest risers at my camp are elegant grey and white birds with long curved beaks and an extraordinary repertoire of sounds, one of which I swear sounds just like a lorry reversing. On some given signal unknown to me these birds give way to the next shift and so on until the screeching rainbow lorikeets arrive. These birds, with their dazzling plumage, are the squabbling adolescents of the bird world with astounding and comical acrobatics.

The half light of dawn gradually gives way to the full light of day as the sun pokes its head above the ocean line. Yes, Australia enchants me and I wonder, as I drain the last dregs of my coffee, what it has in store for me today. I can’t wait to see.